East Africa is laden with remarkable concentrations of wildlife. The Serengeti, the Masai Mara Game Reserve, Ngorongoro Crater, Amboseli National Park – Each has its own treasures to offer. Here is where you will discover one of the greatest natural spectacles to be found anywhere in the world – The migrations of the wildebeest and zebras! Read on for the definitive guide on how and where to witness these migrations at any time of year. We also have two sample itineraries in Tanzania and Kenya, each which would be well suited for witnessing the migration at the right time.

An East African Safari is an unforgettable experience, and becomes even more memorable when you top it off with some R&R on Zanzibar and Pemba islands. We’ll tell you more about the sanguine bliss found on these islands of East Africa.

I want to go on safari and see the migration, when is the best time?

This is a question we get asked a lot and it is not an easy one to answer, as we will demonstrate below.

What is the Migration?

The annual wildebeest migration in Tanzania’s Serengeti National Park and Kenya’s Masai Mara Reserve is arguably the greatest wildlife show on earth! This annual East African event has been filmed, photographed and talked about for years – but what exactly is the hype all about? Read on for our definitive guide to Africa’s most famous animal migration. Every year the Serengeti/Masai Mara ecosystem see millions of wildebeest and hundreds of thousands of zebra migrate through parts of Kenya and Tanzania in search of the best food and water in time with the changing seasons (estimates of exact numbers of animals vary but it is generally agreed there are in excess of 1.5 million wildebeest and 200,000 zebra). Generally following a similar path, they head north from Tanzania into Kenya, never straying too far from water. If you mention the migration to any wildlife enthusiast, dramatic images of thousands of wildebeest running and jumping across the Mara River desperately trying to evade the jaws of the ferocious crocodiles certainly spring to mind, although the classic vision of the migration is in fact a very small part of a much bigger wildlife spectacle.

When does the Migration happen?

This is the most common question for those interested in going on safari in East Africa. The answer is the Migration is happening right now! The actual movement of the wildebeest occurs over a 12-month cycle starting in January in the southern Serengeti running through to December when they return and start the cyclical journey all over again. Below is our detailed guide on the different seasons of the Migration, where you’ll find her herds throughout the year, and how to decide for yourself when is the best time to witness this amazing wildlife spectacle!

Please note that this article is given as a guide to the great migration using years of experience from our partners in East Africa and research from previous years. However, like with most natural events it is entirely dependent on weather. The wildebeest are entirely driven by good grazing, decent amounts of standing water and local weather conditions. They may go slightly off route or take longer to get to the next step and stay longer or shorter at a place due to what the weather is doing. Survival is their primary instinct here and they’ll judge how best to achieve that depending on the weather. Nothing is guaranteed but that said we hope this guide will give you a good insight into what the migration is, and an understanding of how best to witness it. 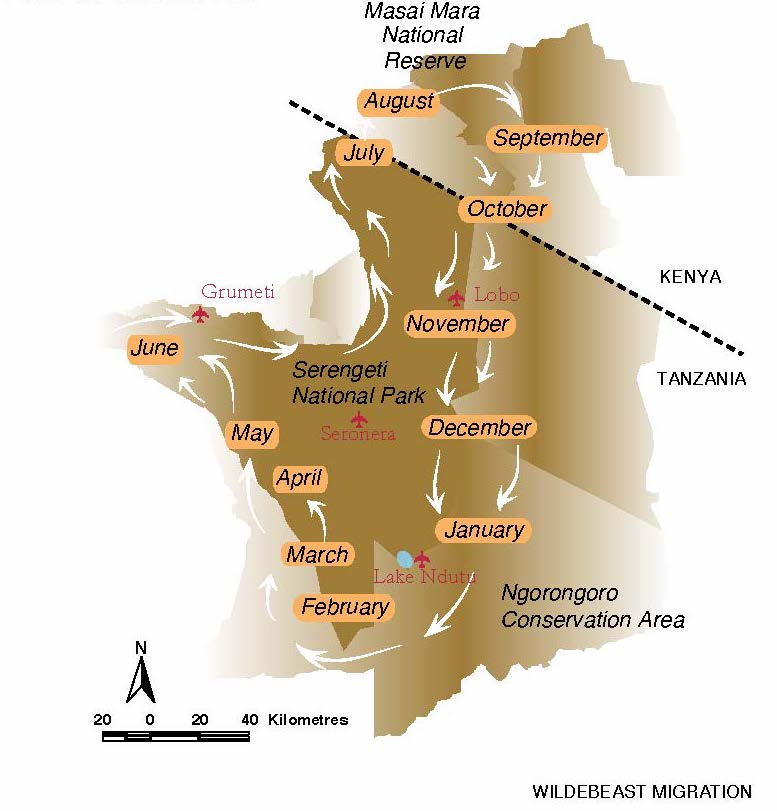 From mid December through to March the wildebeest are in the southern Serengeti for their calving season. It is estimated that as many as half a million wildebeest calves are born during this period with as many as 8,000 being born on any one day. This period follows the “short rains” in November and early December which spurs the growth of new grasses on the plains and therefore more food, hence it’s a good time to give birth as the rates of survival are far higher. The southern Serengeti is also a great place for the mothers to give birth as the grass here is enriched with high levels of calcium and magnesium which helps with their milk production – plus the short grasses are safer as there aren’t as many lurking predators disguised in the long grass.

Yes, one of the best! The calving season in the south Serengeti can be an amazing thing to observe – this is the classic image of the Serengeti’s endless plains dotted as far as the eye can see with wildebeest. The sheer numbers of them as well as the chances of seeing the resident apex predators hunting (lions in particular) make for an exciting spectacle to witness (although not for the faint hearted)!

This period is known as the onset of the long rains and the herds start moving towards the central part of the Serengeti in search of fresh grass. They tend to split into various large groups, some beginning to head to the Western Corridor of the Serengeti towards Lake Victoria and others remain in Central and North Central Serengeti around the Seronera River. As the circle of life needs to continue, this is also when the wildebeest start to mate again as their gestation period can be up to 9 months in length.

Yes and no. The herds and wildlife in general are more dispersed thanks to the proliferation of water sources, thanks to the rains. This is in contrast to the dry months when the animals tend to concentrate around the remaining watering holes. Also, with the rains comes the long grass, making game viewing a little harder. Rain is likely, generally in the form of strong afternoon showers. However, the benefit of this time of year is that there are much fewer visitors in the park, meaning more exclusive wildlife encounters (there is still plenty of wildlife around) and the hotel rates are up to 50% cheaper, so it presents a great value.

The herds are now split, with the majority in the Western Corridor of the Serengeti by the Grumeti River; where many cross the crocodile infested river, making for some amazing wildlife viewing. The other large herds are now in the North Central Serengeti heading towards the Northern Serengeti and Masai Mara. The vision of the migration over this period is the long lines of wildebeest as they head towards the north.

Continuing north, some of the smaller herds will be reaching the Masai Mara by as early as late June, early July. The larger, or mega-herd, takes a bit longer and generally reaches northern Serengeti / Kenya’s Masai Mara in August. It is over this period that the wildebeest need to cross the Mara River in order to get across to the lush grass of the Masai Mara in Kenya. The herds cross at various points of the Mara River, many of these crossing points are in the Serengeti as well as the Masai Mara. It is the Mara River that bears witness to some of the most spectacular crossings of the migration! The vertigo inducing banks can be the first downfall (literally) of the wildebeest – although once they’ve cleared that they then have the second challenge of getting to the other side without being snapped up (again quite literally) by the lurking hungry crocodiles in the water. Once this obstacle has been overcome there are then the steep banks on the other side of the river that they now must climb; not an easy feat after having crossed a river dodging hungry crocs and now fighting with the many hundreds of wildebeest trying to climb the steep bank. In fact, the majority die by drowning rather than being eaten by crocodiles. Despite the death-defying conditions, most of the wildebeest actually make it to the other side unscathed – which is quite remarkable! This is the classic all action part of the migration. It certainly isn’t for the faint hearted and as amazing as it is – it does show nature at its most brutal.

Yes! This is prime migration season, a great time to visit the northern Serengeti or the Masai Mara and certainly a good time to game watch at the Mara River. Note that generally the busiest crossing period is between August and October.

After some time spent in the Masai Mara and Northern Serengeti, the herds begin to head south back into Tanzania. The circle of life is almost complete and the wildebeest return to the mineral rich short grassed plains of the southern Serengeti so they can once again begin their calving season and start the journey again.

Yes! This period is less predictable and the herds tend to split, with large groups scattered, from the North to Central Serengeti. However, it is a great period for a safari as the rains tend to come in the evening and are scattered all over the Serengeti, with some dramatic thunder storms that settle the dust from the long dry season. There are also fewer visitors over this period, which is also a plus and game viewing is still great, in terms of all other wildlife. Lodge rates are also a little cheaper than in the other peak months, so the value is there.

Top tips for witnessing the Migration:

R&R on the Beach in East Africa

A great way to bookend your safari is with some rest and relaxation on the islands of East Africa. Zanzibar and the nearby Pemba Islands are separated from the mainland by a narrow strait. The islands have some of the best beaches in Africa and are the perfect spot for a post or pre safari wind-down. The palm trees and Arab dhows act as the perfect backdrop to lazy days of eating fresh sea food, exploring laid-back villages and swimming in the crystal blue waters on these island paradises.

We have a few beach resorts we would recommend to our clients, but one option we want to highlight this month is Manta Resort on Pemba. The Manta Resort offers something different from most tropical islands — it’s not about five-star luxury. If it’s serenity, close encounters with nature and a family of staff you crave, The Manta Resort is the place for you. Switch off the noisy, polluted electronic world and enter a completely different one, not as a tourist, but as a guest with simple needs: sunshine, fresh air, natural food, a comfortable bed and friendly company. This is the African Island experience you’ve been looking for! Watch this video and we think you’ll agree.

For an incredibly unique experience, every guest should plan at least one night in the one-of-a-kind Underwater Room. The floating structure, Swedish engineered, provides three levels, those above the water clad in local hardwood, and each an experience in itself.

Let us help you plan a once-in-a-lifetime getaway to East Africa. Contact us now to start the conversation!

Your Complete Guide to the Wildebeest Migration07.12.2017