Turkey is truly a beautiful place. Enjoy the scenery of this country and new experiences on this 13-day trip. Go on a hot air balloon ride, visit the historical sights, and eat great Turkish cuisine. Designed for honeymooners, there’s plenty of time for relaxation and romance woven throughout the journey!

Arrive in Istanbul. When you arrive you will be met by your local guide and driver who will transfer you to The Georges Hotel. Take the rest of the day to relax and unwind; take a stroll around the vibrant streets of the Galata district where your hotel is located. 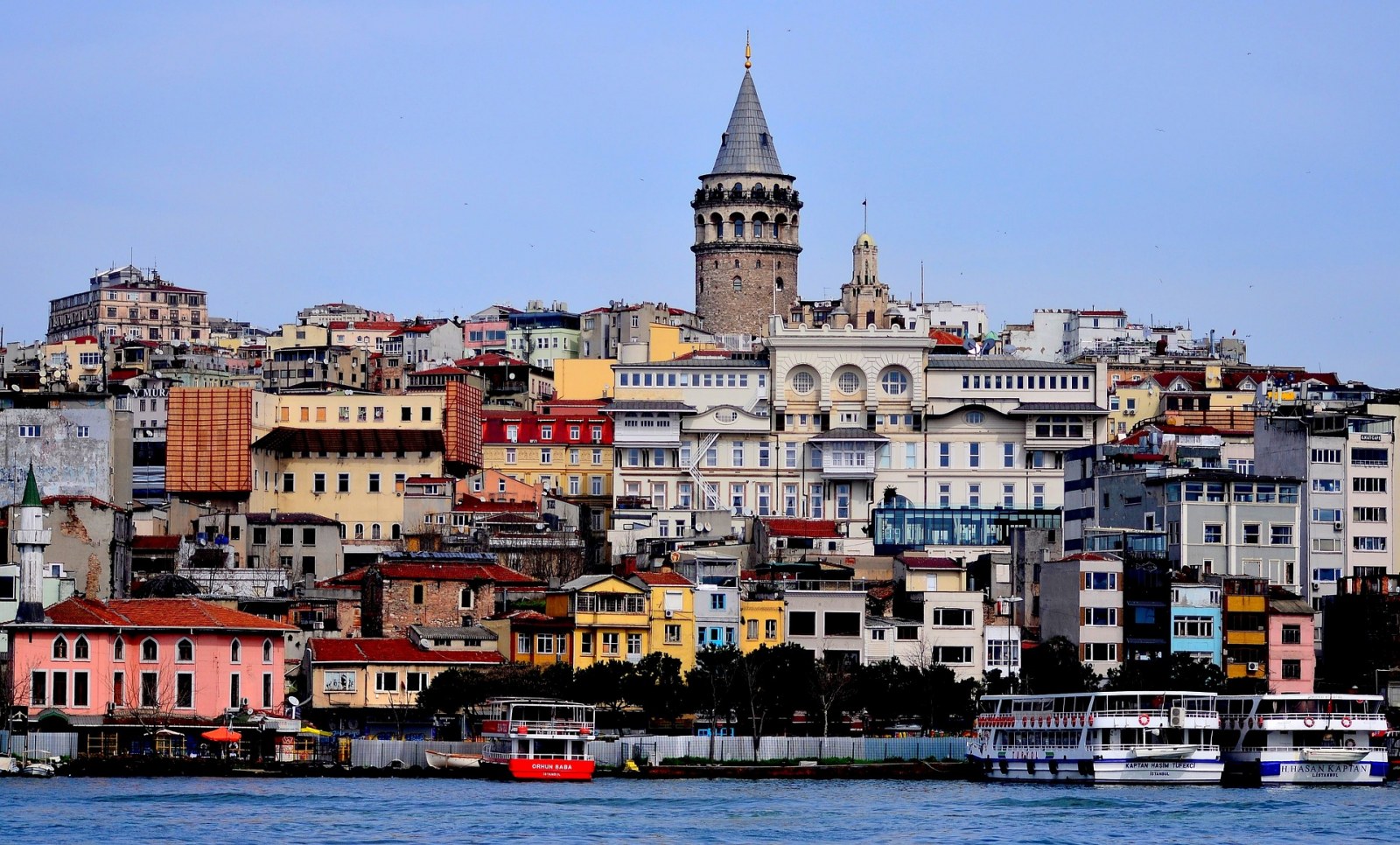 In the morning, we begin visiting the glorious highlights of ancient Constantinople. We head to Sultanahmet and spend time exploring splendid ancient relics such as the 400-year-old Blue Mosque, the 2000-year-old Roman Hippodrome and the Underground Cistern, and the Hagia Sophia Church, miraculously built in the first half of the 6th century, by Emperor Justinianus.

Later in the day we return to the Galata district – the Galata Tower, Istiklal Pedestrian Cadessi, and Taksim Square may be on the agenda. In between we can take a short cruise along the Bosporus. We will arrange your lunch and dinner at fantastic venues in Istanbul featuring intriguing ambience and great Turkish cuisine.

Today we will spend a half day exploring Topkapi Palace and the Egyptian and Grand Bazaar. The rest of the day is at leisure.

Transfer: Fly to Cappadocia in the morning

This morning we take a short flight to Cappadocia located in the center of Turkey. This unusual landscape is a geological and historical wonder composed of extensive underground cities (churches, schools, frescos, homes, ventilation systems etc.) carved into eerily eroded volcanic tuff. After checking into our hotel, we explore Uchisar Castle, an impressive natural rock formation long used by locals as a castle. It offers a superb panorama of the surrounding area. We continue to hike through the Love Valley, famous for its magical fairy chimneys as well as explore the Goreme Open Air Museum with its excellent examples of Byzantine rural art. We finish the day with a stop at a local carpet factory. Turks started making knotted carpets in the 5th century BC in Central Asia and they have been given as highly prestigious gifts since medieval ages. 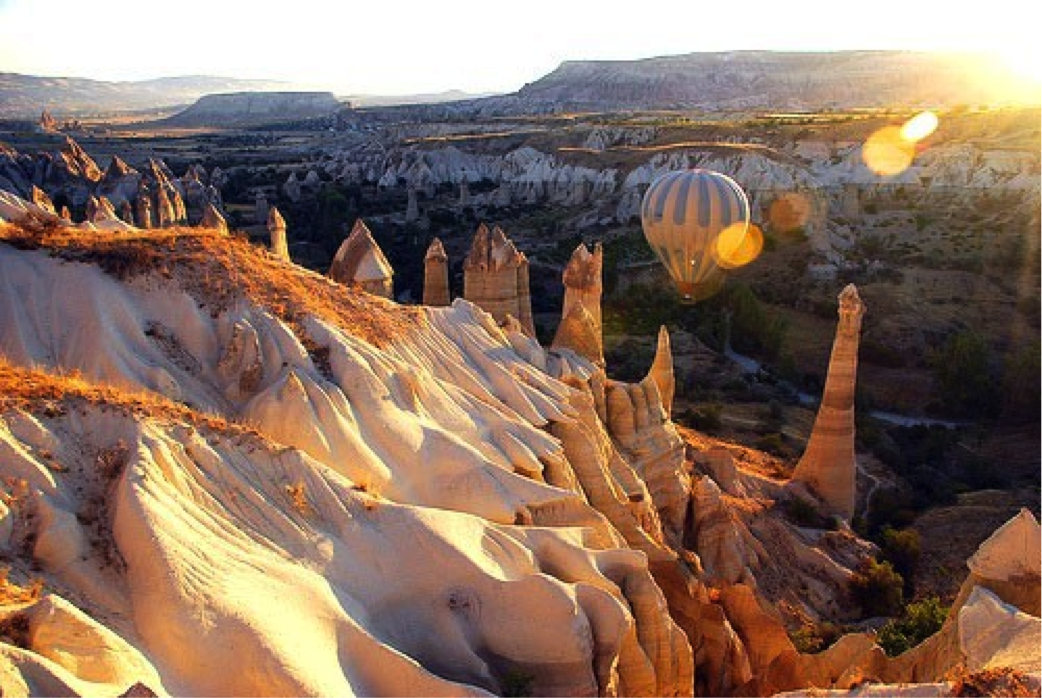 We start our day early with a spectacular sunrise Hot Air Balloon ride above the region. This is truly a once-in-a-liftetime experience and the panorama is truly breathtaking. After landing and enjoying some champagne, we will ‘walk it off’ with a hike through the picturesque Red Valley. With its high walls and narrow canyons, it may remind you of the American Southwest. Our hike passes ancient monasteries and churches as we make our way back towards Goreme. This area of Cappadocia is well known for its pottery, and this afternoon we may stop to visit a local studio to learn more about this ancient art.

Cappadocia has dozens of subterranean towns, but the most impressive are Kaymakli and Derinkuyu. These elaborate settlements are up to eight stories deep (only yet partially excavated) with a tangle of tunnels leading to churches, private living quarters, storage areas, deep water wells, carved chimneys for air shafts and even wine producing chambers. There is one tunnel nearly 6 miles long that connects the two underground cities. Up to 60,000 people lived here for months underground. The determination and motivation behind the creation of these subterranean fortresses is nearly inconceivable. Next, it’s off to the beautiful stream-lined canyon of the Ilhara Valley for an afternoon of hiking. This narrow canyon is simply delightful with dozens of hidden, Byzantine churches, along with their original frescos, to explore along the way. After lunch in the valley at a small cafe situated on the banks of the river, we head back on a different track.

We take the early morning flight to Izmir via Istanbul and a short drive takes us to the Ephesus area. This is a very important delta, where river Kaystos silted for millenniums. The international port of Ephesus has attracted the world’s merchants, artists and the statesmen interest for centuries. In this area we will visit the relics of Hellenistic, Roman, biblical, Byzantine and Ottoman interests such as the ancient settlement of Ephesus, the Archeological Museum, Artemission, one of the seven wonders of the ancient world, House of Virgin Mary, Basilica Church of St. John the apostle, the pretty old village called Sirince where you will stay for two nights. This unique village is under preservation and famous for its nice architecture, wineries and olive oil.

We visit St John Basilica Church in order to have an overall view of the area. We also visit the impressive museum of Ephesus, and Artemission, which was rated as one of the seven wonders of the ancient world, House of Virgin Mary, which is authenticated by Vatican as a pilgrimage destination. Virgin Mary was entrusted to St. John the apostle and probably came to Ephesus with him. The highlight of the day is the great Ephesus. We will walk the marble streets, admire the library, the temples and dream of the big riot against St Paul in the 25,000 seat Roman Theater.

Today your guide and driver will deliver you to Bodrum via the 3 impressive Ionian settlements, Priene, Miletos, and Dydima.

Enjoy your day at leisure. Take this time to relax by the pool or the sea, or go out and explore the town.

Enjoy another day at leisure.

Transfer to Bodrum Airport, fly to Istanbul to catch your international flight home

Transfer one hour to Bodrum Airport and fly back to Istanbul to catch your international flight home.

The Georges Hotel is located in central Istanbul. This hotel is very luxurious and includes both modern design and timeless glamour. The Georges Hotel offers many amenities and facilities for guests to enjoy including private yoga lessons and a rooftop terrace.

The Argos Cave Hotel is located in the heart of Cappadocia. There are six different mansions and an underground tunnel connecting them. Above ground, beautiful gardens connect the six mansions to each other.

Nisanyan Houses Hotel is located within the Ephesus area. It consists of 20 units such as an inn, a village-house, cottages and a tower house. There are many things to do for guests to enjoy including a cooking workshop or a Turkish Bath.