On this journey, dive deep into all the culture, history and nature that Southeast Asia has to offer. Tour the bustling city of Bangkok, take an elephant ride through the jungle, and take a boat excursion down the Mekong River. Continue your journey to experience the humbling ruins of Angkor Wat and the horrors of the Killing Fields in Phnom Penh. Finally, rest and relax on the breathtaking Phi Phi Island. From Thailand, to Laos, to Cambodia, you will find yourself lost in the magnificence that is Southeast Asia. 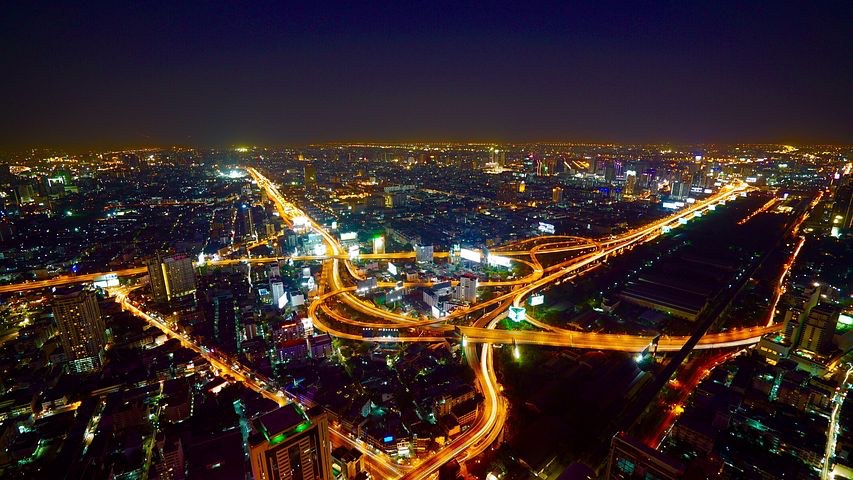 Welcome to Thailand! Arrive in Bangkok. Meet our guide and transfer to your hotel. 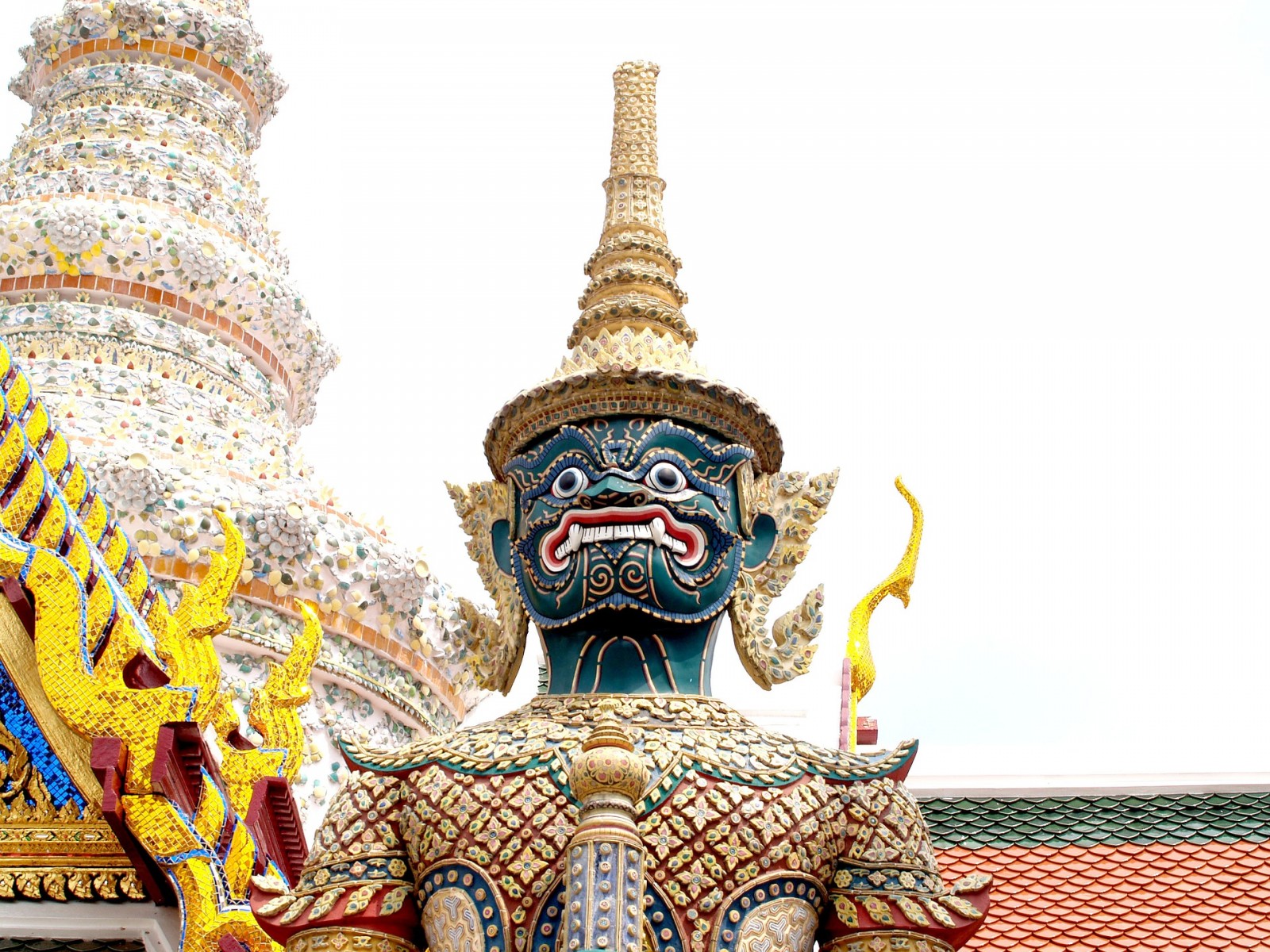 Today, you will have the morning free at leisure.

In the afternoon visit two impressive temples; The Reclining Buddha and The Grand Palace. The Reclining Buddha at Wat Po, is an enormous Buddha covered in gold leaves and lying majestically on its side. The Grand Palace has no equal and is the “must see” for every visitor to Bangkok. Built by King Rama I in 1782, it was the center of power more than 150 years. Today it is Bangkok’s major landmark. Within the compound is the Temple of The Emerald Buddha-Wat Pra Kaew-which houses Thailand most precious image of the Lord Buddha. 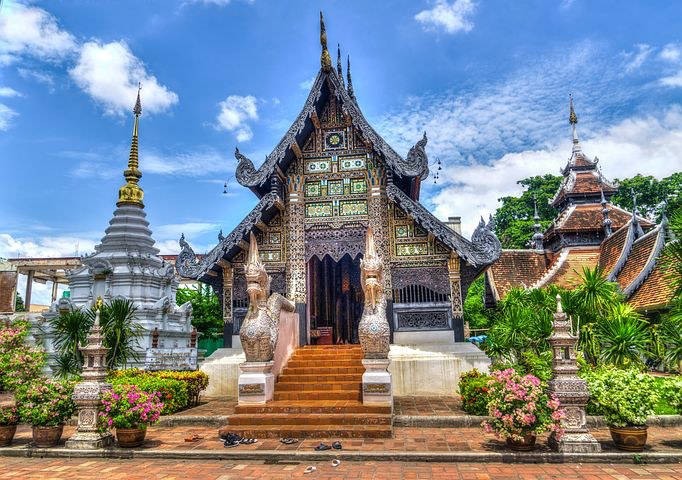 Transfer to Bangkok Airport for flight departure to Chiang Mai. Arrive at Chiang Mai airport then transfer to hotel. Overnight in Chiang Mai. 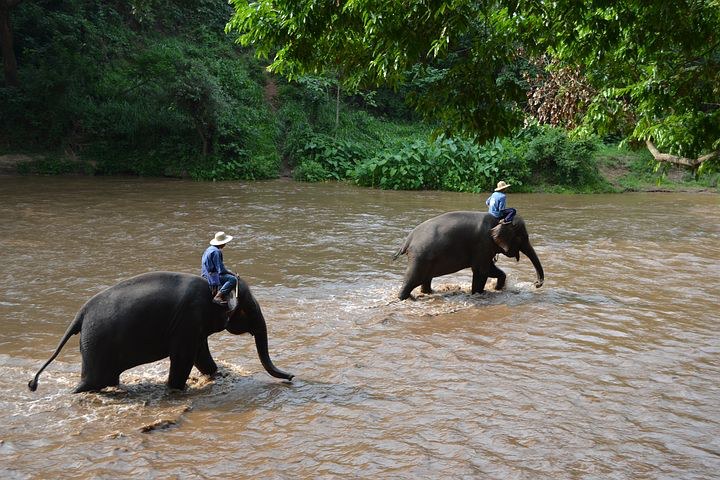 Depart from the hotel in Chiang Mai by a local truck to Mae Wang area. Arrive and begin your 30 minute walk to visit the Hmong Village. Before lunch, have an elephant ride through the jungle for 1 hour.

In the afternoon, continue driving to visit the waterfall. Visit Karen Hill Tribe Village and transfer to a rafting camp to take the bamboo raft along Mae Win River for about 1 ½ hour. Return by truck back to Chiang Mai. Overnight in Chiang Mai. 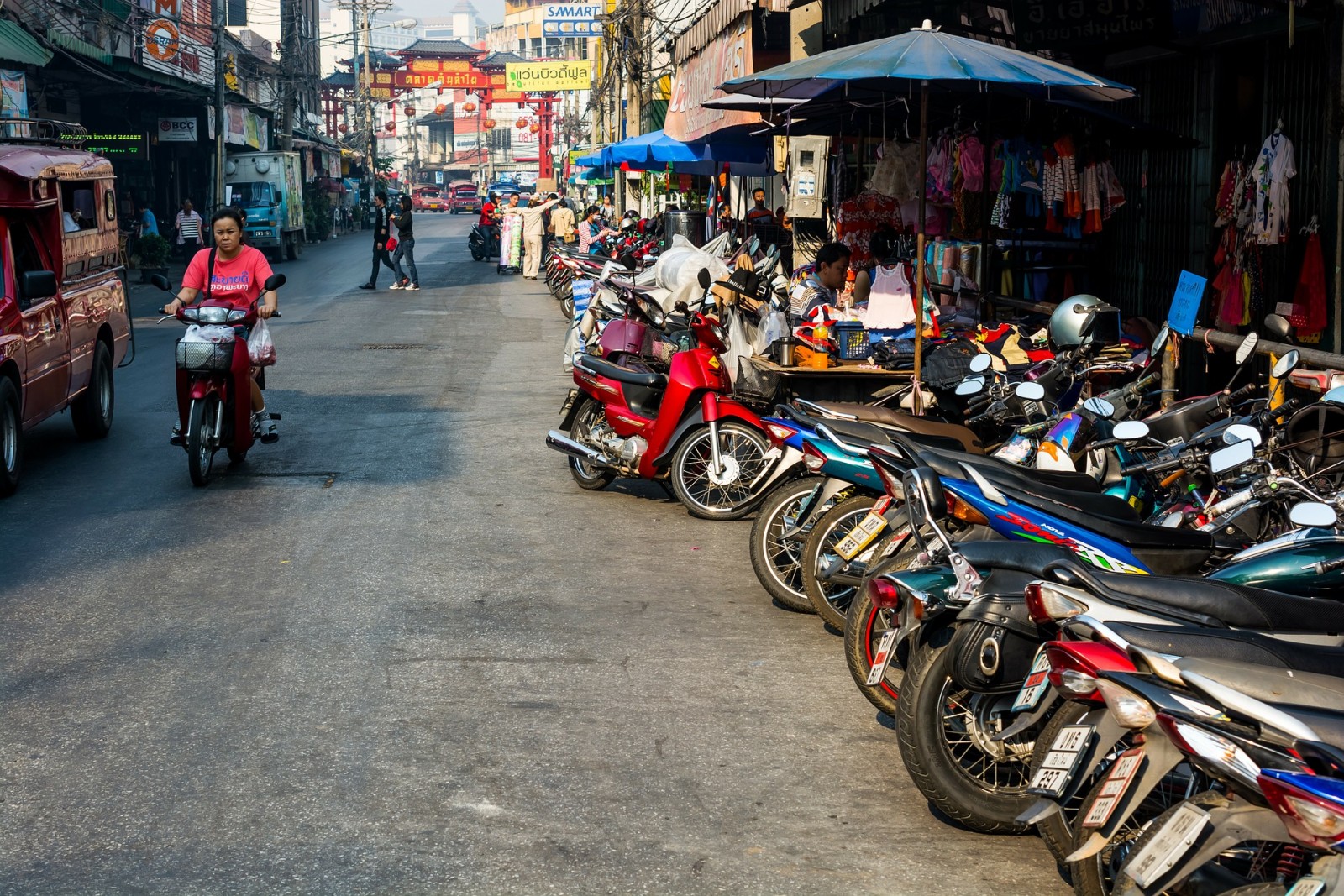 Today is free at your leisure! Overnight in Chiang Mai. 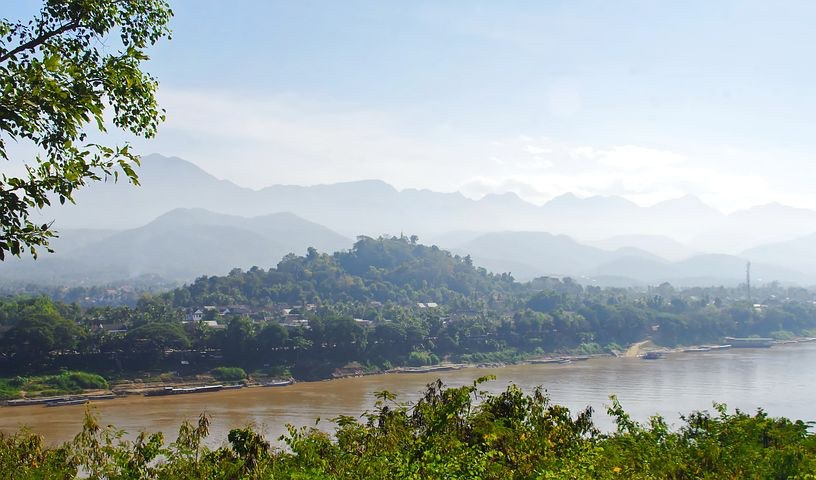 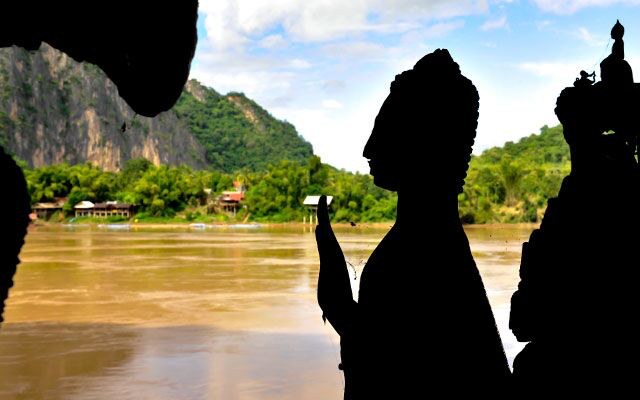 Enjoy the day at your leisure! Overnight in Luang Prabang. 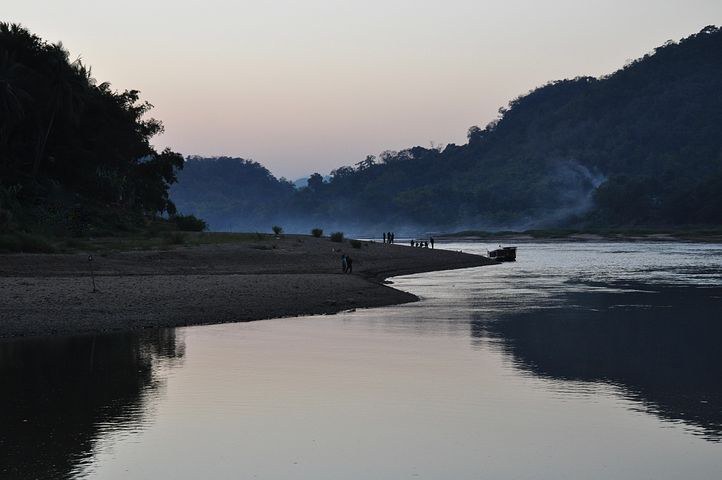 Today take a boat excursion to the Tham Pak Ou Caves and Ban Xieng Maen Village. Travel down the Mekong River to the steep limestone cliffs overlooking the Mekong and Nam Ou rivers, home to the Pak Ou Caves.These extraordinary caves are filled with Buddha images, of every style and material imaginable. Afterwards, stop at Ban Xang Hai, a local village famous for the production of the local rice wine and whisky. 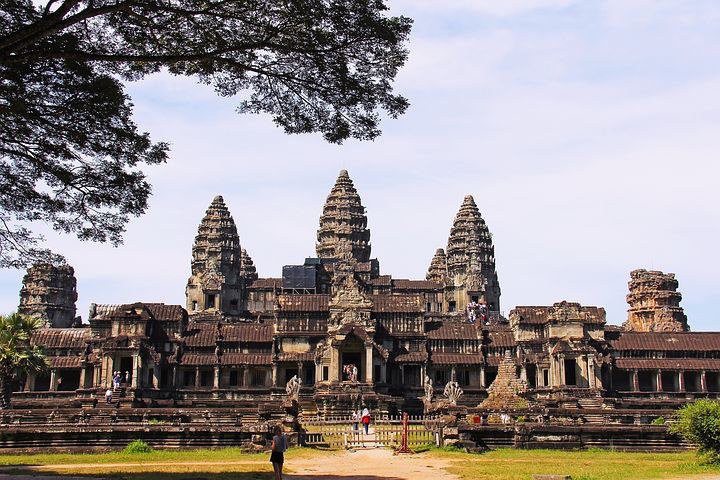 Transfer to the airport for flight to Siem Reap. Upon arrival, transfer to your hotel. Overnight in Siem Reap. 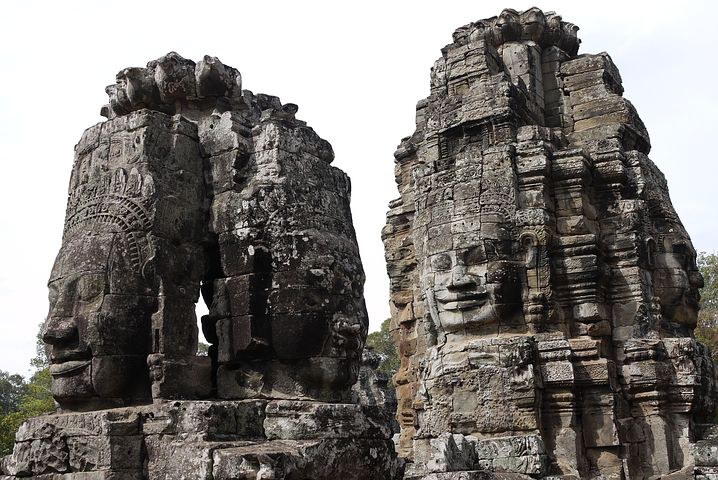 Today, do some sightseeing in Angkor! The fortified city of Angkor Thom covers an area of 10 square km. Enclosed by a wall and wide moats, the city includes many of Angkor’s most popular sights. Enter by the monumental South Gate over a causeway lined on either side by statues of demons and gods, each carrying a giant naga. Continue to the Terrace of the Elephants and the Terrace of the Leper Kings, former spaces for public ceremonies, both adorned with dramatic bas-reliefs.

Visit the ruined Baphuon Royal Enclosure and Phimeanakas before continuing to the mysterious Bayon Temple. In this temple, one of the most popular and compelling in Angkor, explore the galleries of beautifully preserved bas-reliefs and ascend narrow stairs to reach the central sanctuary. Here you will find giant stone faces smiling enigmatically down at you from every angle.

Continue to Ta Prohm, one of the most popular attractions of Angkor. Much of the jungle has not been cleared and most of the Angkor monuments look as they would have appeared when European explorers first stumbled across them. Seemingly miniature in comparison to the other Angkor temples, Banteay Srei is considered to be the jewel of classical Khmer art. Built in pink sandstone, the walls are covered in exquisitely preserved carvings of unusual delicacy. Because of its small size, fairy-like atmosphere and extraordinary examples of Khmer sculpture, this temple is often a favorite with visitors. Watch the sunset over the Cambodian countryside from the upper terraces of an ancient Angkorian temple. Overnight in Siem Reap. 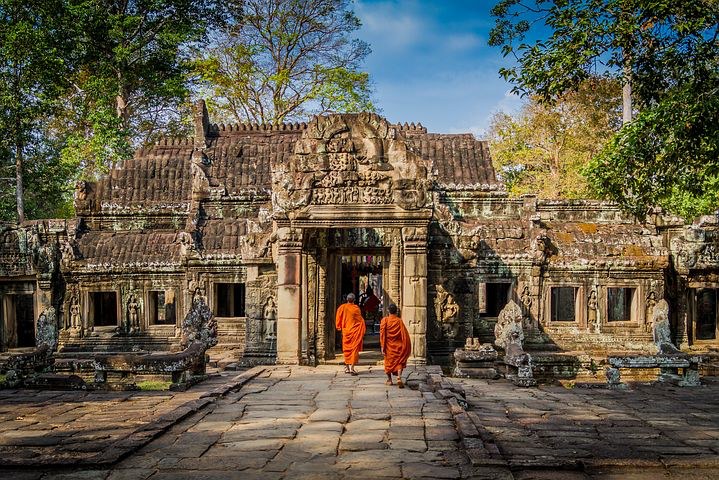 The crowning jewel of Khmer architecture, Angkor Wat Temple is a national symbol and the highlight of any visit to Cambodia. Angkor Wat impresses visitors both by its sheer scale and beautifully proportioned layout, as well as the delicate artistry of its carvings. To approach the temple, first cross the vast moat, continuing along a broad causeway lined with naga balustrades. As you enter the main building, ascend through a series of galleries and courtyard before reaching the central sanctuary, which offers beautiful views back over the causeway and across the surrounding countryside. On the way, stop to enjoy the intricate stone carvings that adorn nearly every surface, with some 1,700 Apsaras, or celestial dancers, sculpted into the walls. Along the outer gallery walls run the longest continuous bas-relief in the world, which narrates stories from Hindu mythology, including the famous Churning of the Ocean of Milk. Angkor Wat is stunning at any time of the day, but sunrise and sunset are especially beautiful times to watch the play of light on the stones. 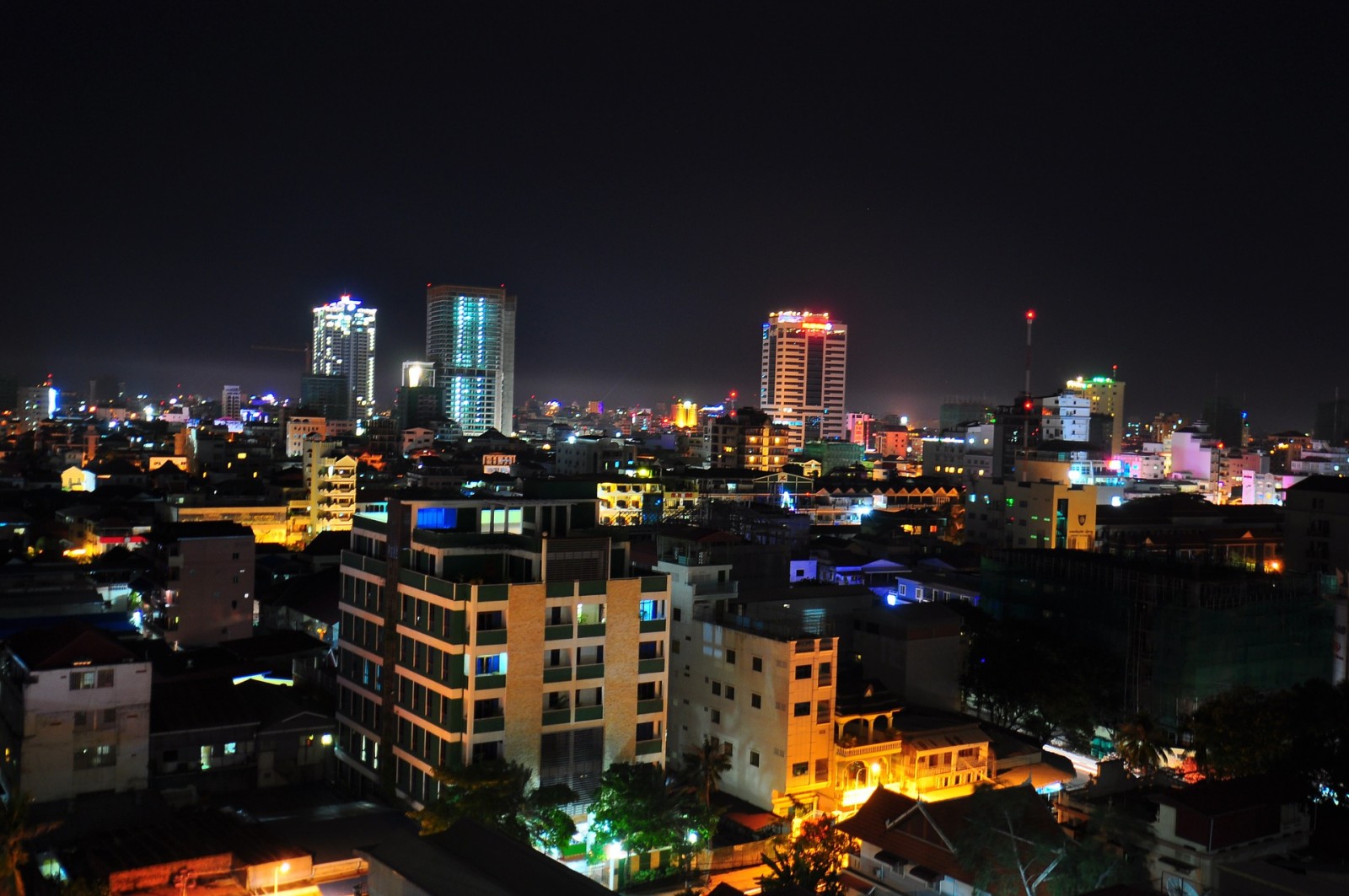 Today, board a flight from Siem Reap to Phnom Penh. Overnight in Phnom Penh. 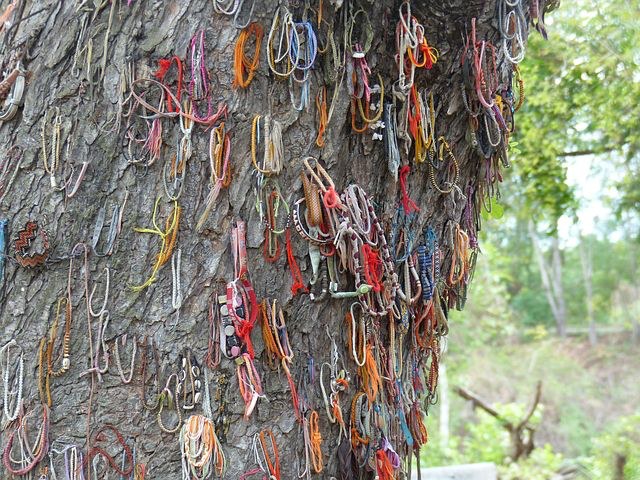 Today, take an excursion to the Killing Fields. Just outside Phnom Penh, in a peaceful rural setting, the Killing Fields of Choeung Ek provide a stark reminder of the atrocities under the Pol Pot regime. Thousands of people were killed here between the years of 1975 and 1978 and buried in mass graves. Learn about a chapter from Cambodia’s more recent, tragic, past at the Tuol Sleng Museum (Museum of Genocide). Formerly the Tuol Svay Prey High School, in 1975 this became the interrogation and torture facility for the Khmer Rouge regime – at that time known as Security Prison 21, or simply S-21. Kept largely unchanged, this prison now showcases photographs and exhibits about the thousands of victims that passed through these doors – only seven of whom came out alive. Overnight in Phnom Penh.

Transfer: Fly to Phuket via Bangkok 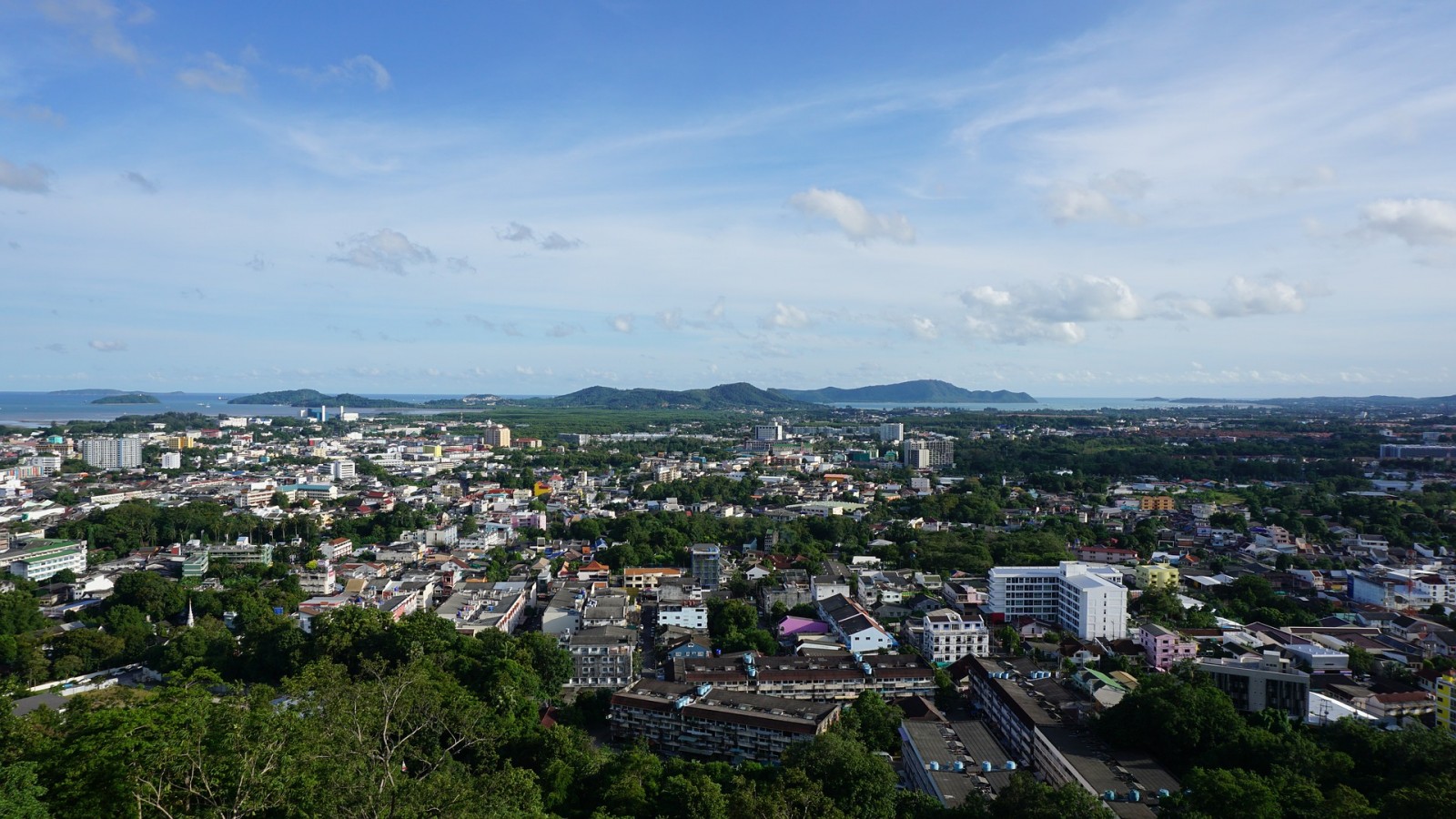 This morning, transfer to the airport for your flight to Phuket via Bangkok. Arrive in Phuket and transfer to hotel. Overnight in Phuket. 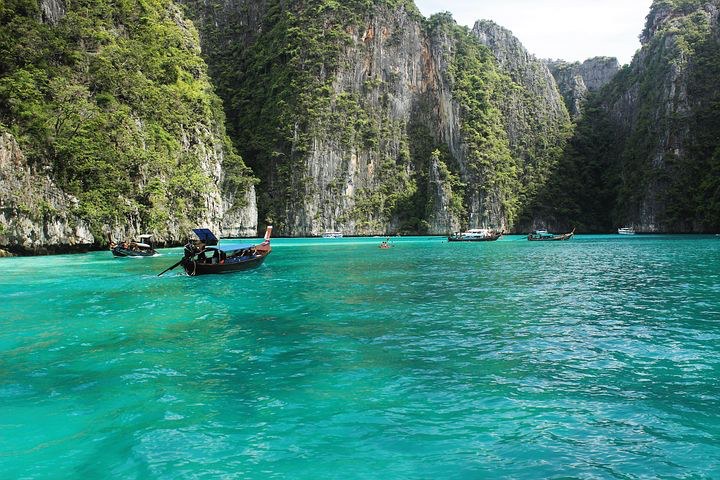 After breakfast, transfer by van to the water and board a speedboat to Phi Phi Island. The rest of the day is at your leisure! 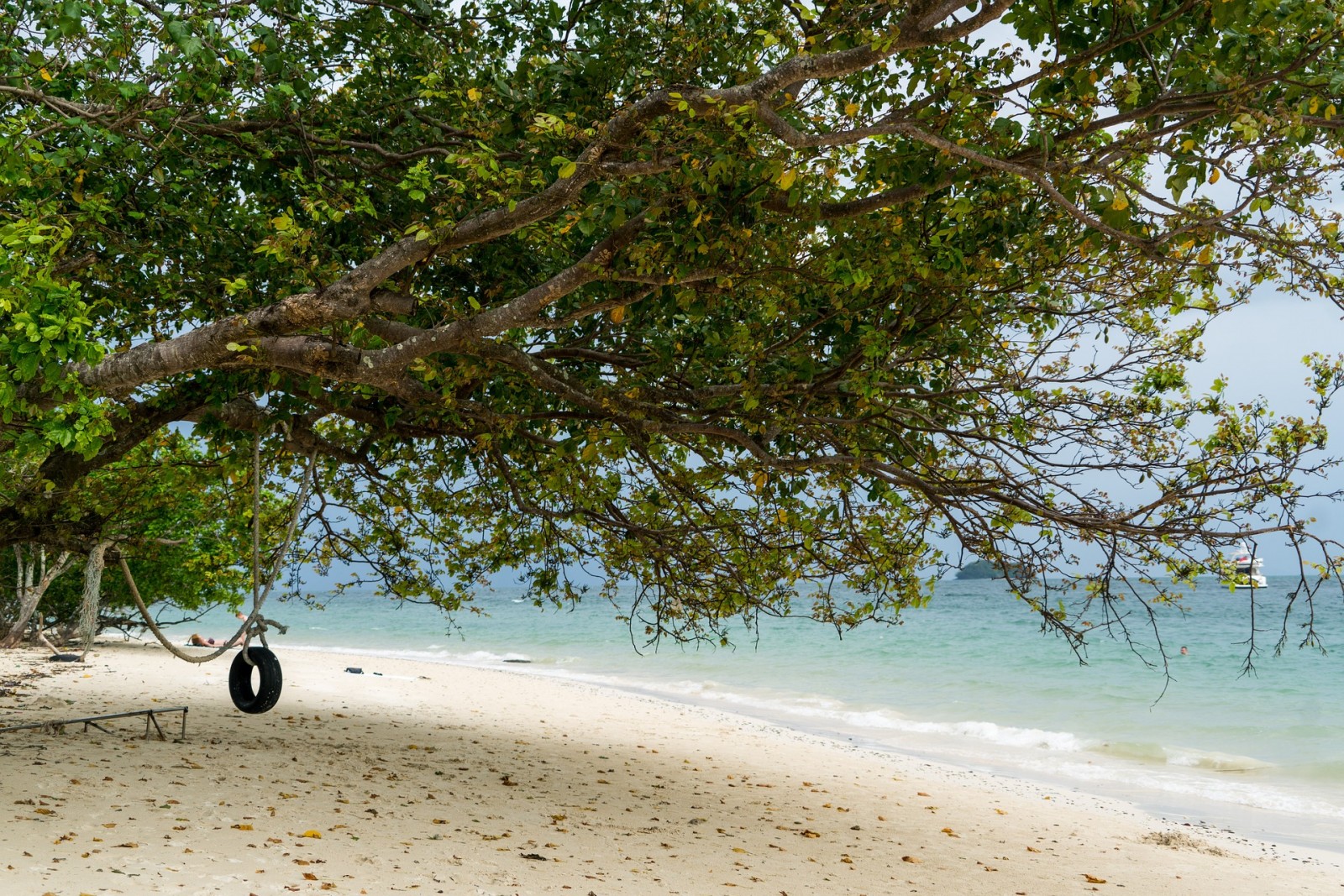 Enjoy a day of leisure on Phi Phi Island! 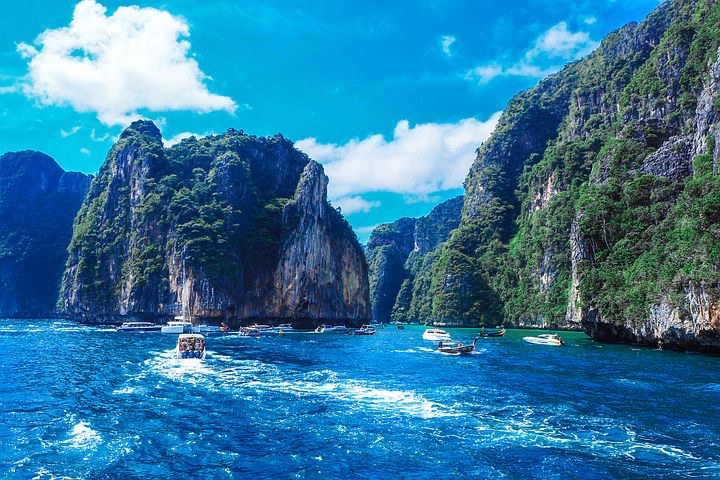 Today is free at your leisure. Enjoy!

After breakfast, transfer by hotel service van and board a speedboat back to Phuket. The rest of the day is at your leisure!

Transfer to Phuket Airport and begin your journey home!

Opened in 1970, Dusit Thani is an iconic, luxury hotel in the core of Bangkok city. The building embodies the very essence of Thailand with its hospitality, artistry and grace. The rooms and suites feature distinctive Thai elements that fully immerse guests into Thailand’s culture and lifestyle.

Renovated from a Heritage House, Villa Nagara Nam Khan Riverside, Luang Prabang, is a riverside boutique hotel that offers an authentic, tranquil environment. Each guestroom has its own original, unique layout and offers guests comfort in style. The hotel sits in the heart of Luang Prabang and is very close to many major historical landmarks.

This luxury hotel offers an array of services and amenities ranging from bicycle rentals to barbeque facilities and features a fusion of traditional Khmer/Thai décor. The hotel is located near the city center and taxis and tuk-tuks are always accessible to take you to nearby venues and sights. The beautiful swimming pool, business center, and lounge make checking into the Tara Angkor Hotel a most memorable experience.

For over 17 years, Juliana Hotel has offered and valued the highest quality standard of service to their guests. With a swimming pool, fitness center, sauna, spa, restaurants and much more, the Juliana Hotel is ready to suit any needs you may have with 24 hour, first class service.

Holiday Inn Resort Phuket is perfectly located in the heart of Patong, Phuket’s most famous beach. Just steps away from the beach as well as shopping dining and nightlife, this hotel is well known for its excellent breakfast buffet and cuisine in the resort’s four restaurants. Holiday Inn Resort Phuket offers guests warm Thai hospitality and is simply Patong’s best choice for a relaxing stay.

The hotel covers 70 acres of beautiful palm trees, gardens, and a half-mile of white, sugar fine beach overlooking the Andaman Sea. The resort features four restaurants and three bars with views looking out to the sea. This is a truly relaxing and tranquil accommodation suited to anyone looking to experience all of Phi Phi Island’s beauty.