Join us on a magnificent journey through Turkey!

Begin in Istanbul and discover some of the most unique and exciting sites of the city, including the Blue Mosque, a cruise along Bosphorus waterway, and the Grand Covered Bazaar. Move on to the famous Cappadocia, where you will have the chance to explore the underground city at Kaymakli, take a Hot Air Balloon ride over the landscape and participate in a traditional cooking class. Finish your trip with a 4-day cruise starting in Bodrum where you will visit the city of Ephesus and swim in crystal blue waters. 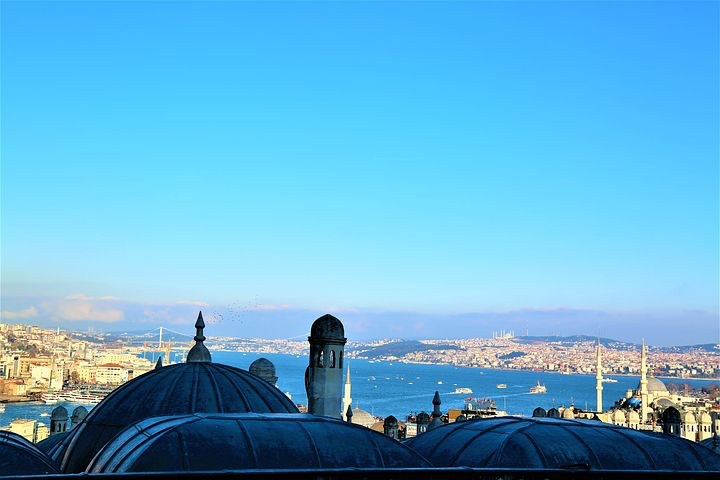 Upon arrival, make your way through customs, then meet your guide. You will be transferred to your hotel by your private vehicle and escort.

Enjoy a day of touring in Istanbul!

Step into the Blue Mosque and you’ll see why it carries the name. Inside are 21,000 shimmering blue tiles broken by 260 stained-glass windows. The light-filled mosque is an elegant tribute to Ottoman genius of the 17th century. With six graceful minarets adorning the imperial building, this masterpiece is one of the city’s most recognized landmarks.

Then continue with “The Hippodrome” which was a colossal stadium where the socio-political life of the Roman capital was centered.

Next go to the Topkapi Palace which was the center of Ottoman government and the court. The Turks ruled most of Europe and the Middle East from here. Covering the prime property on the peninsula, the court-defined grounds of the Palace express in the architectural sense the Ottoman ideal of the perfect life balanced between its formative components. Explore the breath-taking grounds, domes, porticos, terraces, great halls of the Palace.

Next is the Hagia Sophia, which is just one of the extraordinary buildings in the history of architecture. When a previous church on this site was burned during the Nikka Revolt in 532, Justinian ordered to build a structure worthy of his empire. The building inspired countless generations by its colossal definition of what the interior space in a domed basilica was to be and by its innovations in weight-support and construction techniques. The popular belief was that ‘the dome was suspended from Heaven by an invisible golden chain’. In reality it was work of men, but a worldly simulator of the Heavens.

Visit the 6th century Basilica Cistern- perhaps the most unusual structure in Istanbul. Exhibiting the engineering marvels that solved water supply problems, it comprises more than two acres and 336 columns over 8 meters high support its ceiling. It can hold 18 million gallons.

Finish your day with Rustem Pasa Mosque in the Blacksmiths Market, known for its outstanding Iznik tiles. This charmingly busy neighborhood perfectly narrates the Ottoman ideal of a balanced social existence. Stroll through the busy market area into the Spice Bazaar where you will find all manners of wonderful things. At the end of your tour, return to your hotel. 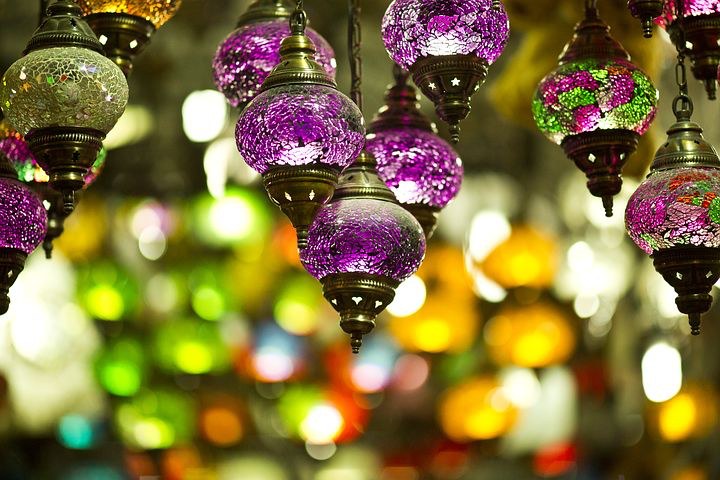 Meet your guide in the lobby and enjoy another day of touring Istanbul.

Start your day with a leisurely 2 hours cruise along Bosphorus against the majestic skyline of Istanbul and watch the splendid mansions, Judas blossoms, forts and palaces.

Created by a cataclysmic flood some 7700 years ago, the Strait connects the Black Sea with the Mediterranean and is one of the busiest waterways in the world. The strategic importance of the passage has always been of enormous proportions and its feature of a long and deep harbor (‘Golden Horn’) gave reason for the creation of a city. The starting point for the sitting of the city’s monuments was primarily the effect of their appearance from the Sea. A subtle perfection was attained by clearly setting sublime domes and minarets against the sky and by unifying the urban texture with the topography of the landscape. The water that surrounds the city was regarded as a mirror, which would capture and reflect the images above, complementing the glorious buildings further. The elements of the pre-Islamic past and the unequalled silhouette of the Muslim city are surrounded by late-Roman city walls, and all of these only enrich the ultimately diversified cultural life of Istanbul.

The infinite energy of today’s city beats merely as a finite moment watching the waters that flow fast through the Bosphorus. The duality between Europe and Asia created by the Strait characterizes the identity of the city and finds its expression in countless moments. Modern Istanbul possesses an evocative panorama under the weight of her long history. Monuments of colossal cultural value are immersed in a beautiful landscape. The outcome is Istanbul’s breath-taking filigree silhouette. Disembark at the Pier on the Asian side of Istanbul.

Continue straight to coast line of Asia-Istanbul and have one hour bike ride along the shores of Marmara.

After leaving your bikes, drive along the Bagdat Street disclosing another face of Istanbul’s ‘local life’. Stop at the exceptionally vivid Kadikoy for lunch at ‘Ciya’ of presenting multi-ethnic culinary through ages.

After a walk through the market place ‘elbow to elbow’ with Istanbulites buying their daily supplies, we shall drive to EuroIstanbul via Bosphorus Bridge.

In the afternoon, explore the most dazzling of all the bazaars; the Grand Covered Bazaar, built in 1461. Along with magnificent mosques and complexes, undoubtedly, the mother of all bazaars was a monument of rise of Istanbul. It contains more than 3,500 shops and employing more than 20,000 people  under same roof. Everything imaginable: gold & silver jewels, old & new rugs, antiques, tiles, leather & souvenirs. Just seeing and experiencing this venue is worth the trip. Return to the hotel in the late afternoon.

Fly: From Istanbul to Cappadocia 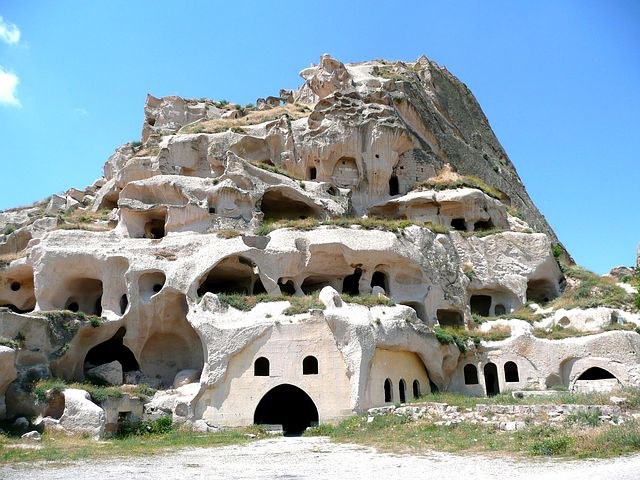 After breakfast, meet your vehicle for your transfer to Istanbul Airport, for your flight to Cappadocia.

Upon arrival, meet your private vehicle and guide and start exploring the region. During the time you spend in this magical fairy land, you are able to explore the three faces of Cappadocia: By plenty of panoramic viewings and several opportunities for hiking and ballooning that will take you off the road into the very heart of the landscape, you will meet the face created by Nature.

Take a guided tour to fascinating rock-carved churches and subterranean settlements. Marvel at the face created by faithful and industrious men and discover their fascinating culture today; the art, creativity and endeavor of its men and women manifest in its pottery and its weaving.

Later in the day, visit a marvel of the region: the underground city at Kaymakli.

Continue your day with an easy hike through one of the most beautiful and mysterious valleys in the region. The valleys – with its fabulous volcanic rock formations – are in the heart of Cappadocia but well away from the mainstream tourist haunts! The little chapels of the hermits, carved out of the valley walls, lend a spiritual dimension to the beauty.

Continue to explore off the beaten paths of the region and Soganli Villages. Return to your hotel in the late afternoon. 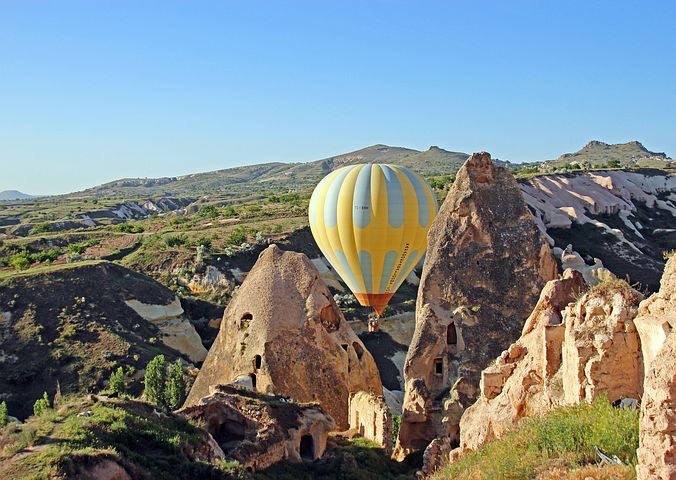 Early in the morning, take a Hot Air Balloon ride over the Cappadocian landscape. Many report this to be an experience of a lifetime and is recommended by National Geographic as the most suitable landscape and climate.

Drive to Sinasos, famous for its excellent Ottoman and Greek architecture. Here, you will experience traditional cooking class in Old Greek House.  Turkish food is famous as well as Turkish history. Each meal has a special ceremony. Today you will learn all the hints and techniques to cook one of these special Turkish dishes. You will enjoy what you have cooked as your lunch with a glass of wine. Then take an easy stroll to explore the village.

After lunch, continue with breathtaking vistas and visit Avanos town on the Red River to visit a potter’s workshop and learn about this timeless art of Cappadocia, giving life to the clay from the riverbeds.

Fly: From Cappadocia to Izmir 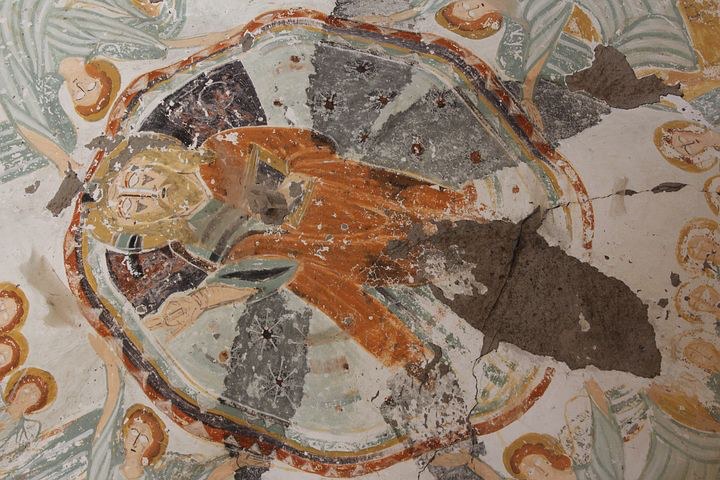 After breakfast, meet your guide and start your day with an enjoyable off-road cycling excursion through tracks among breath-taking rock formations and valleys.

Next, explore one of the most extraordinary treasures of sacred art: The rock-carved churches of Goreme, now an open-air museum. Also make some stops at panoramic viewpoints commanding breathtaking views.

After lunch, continue to Kayseri Airport for your direct flight to Izmir.

Upon arrival meet your private vehicle and drive to ancient and authentic Greek (Turkish since 1923) Village of Sirince for dinner and overnight.

Transfer: From Izmir to Bodrum

Board your private yacht and embark on your 3-night cruise! 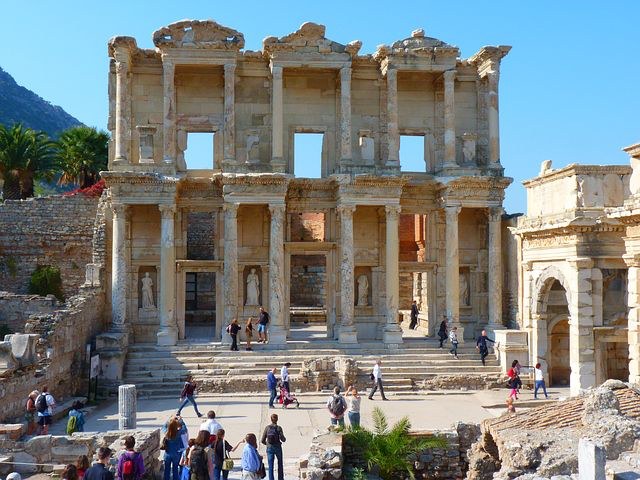 After breakfast, meet your guide and begin exploring the antique city of Ephesus that will feature the remains of the best preserved Ionian site in Roman times in Eastern Mediterranean. This was the leading trading city –as well as a center for the cult of Cybele/Artemis.

Your Ephesus visit also features the spectacular Terrace Houses. Located on the ramp of Ephesus where the wealthy Ephesians lived, they are decorated with spectacular mosaics and frescoes. These houses were brought to light after completion of excavations in 1980s constituting the best preserved examples of domestic architecture ever found.

Next continue to Bodrum (2hrs) via fertile Meander Valley and embark your private yacht. After the safety briefing, you will sail out of the marina for dinner and overnight.

Arrive in Bodrum, one of the leading resorts and the undisputed “hot spot” of the Aegean Coast. The boat will take you to Tavsanburnu which is located a short distance form the south coast almost exactly halfway between Bodrum and Cokerme. You will be having your dinner and spending the night in Tavsanburnu. 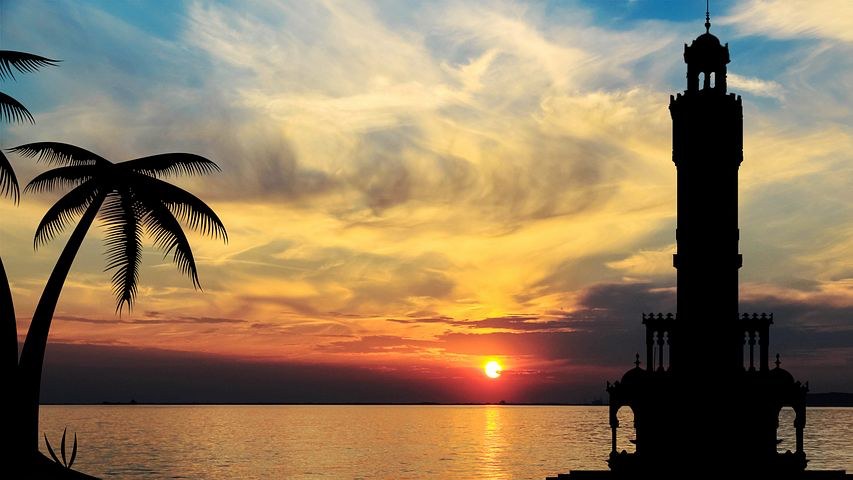 Today we cruise to Orak Island. Kargacık Bay and Orak Island are very close to each other. Both places are wildly beautiful with its nature and view. You can enjoy the crystal waters for swimming all day or you can explore the island. 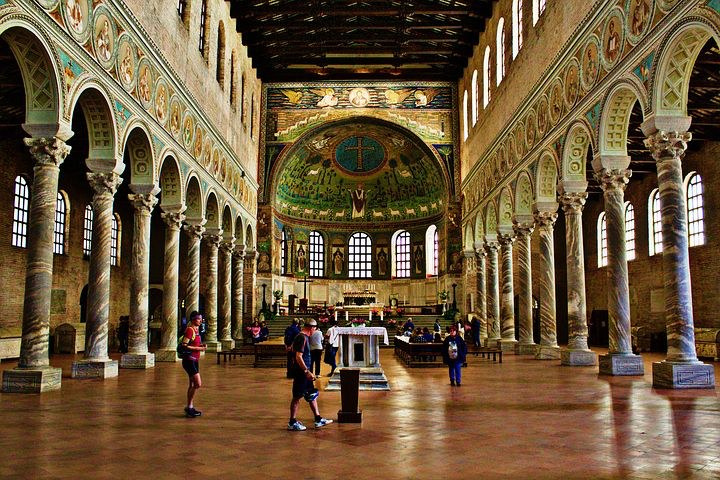 Today we cruise to Kisebuku. Go on a journey into one of the most beautiful places, the ancient Byzantine churches and buildings, specifically Gulf Kise.

In Kisebuku, you will encounter the ruins of an old monastery by the name of Kise Bay. The most wanted places in the Kisebuku ruins include Yalıkoyu, Akarca, Fork, summerhouse, bath, cistern and the cove where the ruins of the church are found. The waters are crystal clear with a wonderful backdrop of pine covered mountains.

Arrive back in Bodrum Marina.

After breakfast, disembark your yacht and transfer to airport for your flight to Istanbul. Upon arrival connect with your international flight.

Istanbul’s most iconic hotel, Pera Palace, has been located in the vibrant Beyoglu district for over a century. It combines timeless glamour and elegance with genuine Turkish hospitality. Today Pera Palace Hotel retains its unique heritage combined with a modern touch which epitomizes cosmopolitan Istanbul.

Staying at the Museum Hotel, you will very quickly find that the name is well suited to the hotel. During your stay, you will be surrounded by the splendor of history. Guests will experience Cappadocian culture in every way with all the rooms, restaurant, reception, and all the outer spaces are decorated with valuable—and in some cases, priceless—antiques, registered in Nevşehir Museum.

Nisanyan Houses Hotel is located within the Ephesus area. It consists of 20 units such as an inn, a village-house, cottages and a tower house. There are many things to do for guests to enjoy including a cooking workshop or a Turkish Bath.

Come aboard the Yacht Casa Dell Arte 1 for a one-of-a-kind experience of Turkey’s coastline. Starting in Bodrum, you will have the opportunity to explore some of the most beautiful cruising waters on earth. The yacht offers a relaxing atmosphere and allows you to enjoy the sea with the comfort of your home.